The first time I visited the Colonial Theatre it wasn’t a theater at all. It was an art supply store. In the grand tradition of art supply stores it was a funky old building crammed full of art stuff. Initially I was preoccupied with my search for the perfect platinum printing paper. For my trouble, a pack of Strathmore 500 hot press pre-1980 did reveal itself, but this was no ordinary art store. Ornate columns popped nonsensically through the floor and disappeared into a hanging ceiling. An arched frieze festooned with the faces of women curved through the center of the store. Clearly, there was something unusual about this place.

My curiosity led to a conversation with the store’s proprietor, Steve Miller. Steve filled me in. The theater opened in 1903. It had a 49-year run, first with legitimate theater, then movies. In 1952 Steve’s dad, George, bought it at auction. George was not the high bidder but promised to keep the building intact. He leveled the floor and built a room inside the audience chamber for his store. The stage became the frame shop and the lobby was given over to wallpaper and home decorating. For the next 50 years the Miller Supply Company occupied the theater.

George, then Steve, cared for the aging relic, patrolling the attics and catwalks to place buckets under the leaks. Most of the theater was sealed off to keep the heat in and the vandals out. The gilded theater became monochromatic as the fine grit of the city filtered in and covered the horizontal surfaces. Such was the state of things in the1990s when Steve granted me access. First, he would go to an ancient switchboard and throw a few knife switches to turn on the lights. Next, there was an airlock of cardboard doors to push through, up a stairway, around a corner and then there you were in this tired and wondrous space. The feeling of emptiness was palpable where once a full house of over 800 people had laughed and cried and applauded and stamped their feet. Through the brick walls the muted sound of traffic on the county’s busiest road was audible. People were going about their lives not 100 yards away, but a timeless dream state engulfed the empty audience chamber.

Beyond the audience chamber was the stage. The stage however, was made over into a room, serving as the frame shop. Like a stage set, lines in the flyway suspended this room. It was in reality a functioning set in which people worked. Frames were even assembled here for Norman Rockwell. It lasted this way from the 1960s, when George Miller set it in place, until the renovation. With this orientation one had no idea they were in fact on stage. Beside the room a narrow stairway set zigzagged up the wall into a patch of light and then up into an unfathomable darkness. The stairs were drab and colorless, coated in fine sooty dirt. The wood was splintery, and they creaked and rocked with every move. Up I went, tripod and camera in hand. At the first landing planking provided a walkway across the back wall to the opposite side where a single small window provided the only illumination for this cavernous space. There too was the pin rail. Here coarse three-strand hemp lines materialized out of the darkness from above where decades before they had been made fast to the rail. Their considerable tails lay coiled on the floor. This was a stagehands’ station (though we might have been aloft on a square-rigged ship). Also on the suspended platform was a chair and some old burlap- covered counterweights. On the brick walls the names of stagehands and set painters were handsomely painted and dated. From this restricted perch they painted canvas backdrops on a stage-sized easel which was raised and lowered past the stationary painters. The base of this easel was covered in sculpturally thick paint drips, but the drips, ablaze with color at their inception were now drab under the omnipresent soot. Cradled in coils of line was a dead starling who had managed to enter the chamber but for whom there had been no escape. I noted with interest the bird’s ongoing decay as I revisited the site from time to time. The stairs led much further up – all the way to the top of the flyway but as there was no light and no place to position a tripod I concentrated my photography on the middle level cat walk.

As color was nonexistent, this place spoke in black and white. The low light level and unstable footing presented a technical challenge. Exposure times of more than a minute were necessary. Some scenes were too dark to focus in the camera and had to be done by distance scales. The swaying platform and planks needed to come completely to rest before the shutter could be tripped. I needed to remain completely still during the exposure. It was not until the film had been processed could I know for sure if it had been a success. Upon reviewing my negatives my appreciation for this scene grew with every viewing and new avenues of exploration continually presented themselves.

From this vantage point, level with the top of the arch, the heavy asbestos fire curtain blocked the view into the audience chamber. The curtain had been lowered two-thirds of the way since 1952 or before. The arch, the lines, the curtain back, and pin rail combined to form a novel and evocative space where time, geometry and scale interwove into a fantastic and improbable place. At this juncture, imagination was directing the camera. This is the absolute best place a photographer can hope to be in. It was as if the theater, this machine for fabricating illusion, had created its own illusion in the many years since anyone had paid it attention.

For the Colonial to be restored this entire setting would have to be destroyed. Thus, my motivation was doubled, not just to harvest the great photographs visible in all directions, but also to honor this time capsule by preserving it in photographs. I could have been content with the images I had made in this place and been done with my photography at the Colonial. Despite the many subsequent photographs I have made, none interest me as much as this earlier series.

There are different reasons, however, for making photographs. I felt compelled to follow through and recording what was to come.

From 1978 to 1986 I was curator of photography at the New Bedford Whaling Museum. I had charge of thousands of prints and negatives from the past in an area with some of the richest, oldest history in America. And yet we were often appalled at the gaps. People, places, and buildings had disappeared without leaving a record. In the present we do not think that soon this will be the past and what is around us now will change and disappear. Of course, it all cannot be systematically recorded, but sometimes it is obvious that a subject is special and that it will be changing form – for better or worse. Future generations – even we ourselves will wonder what it was like. The Colonial struck me as just such a place. It isn’t the first. I recorded the Sprague Electric Plant and its transformation into Mass MoCA. I have recorded other buildings as well. Some have had futures, and some, such as the Waterman and Moore Opera House in Williamstown, were on a fast track to oblivion. Even when it appears that salvation is at hand, you never know. And so I was committed to recording the restoration of the Colonial Theatre.

In the century of the Colonial’s existence many theaters had come and gone. It looked as though the Colonial was going to beat the odds. The number of near misses became evident during the renovation and made its survival seem all the more miraculous. Damage from fires was revealed within the walls in several locations. In the attic, ancient knob and tube wiring had recently carried current. Despite George and Steve’s heroic efforts, water had made its way into the building and flowed down the inside of the walls leeching away the plaster and mortar. Potentially explosive cans of decaying film were stored in the projection room. Fundraising was, as always, a challenge. Construction activity carried its own risks. I often wondered, was I making a final record of a doomed building or documenting a building at its low ebb just on the verge of renewal?

And so I set to work. Several distinctive and very different series resulted. I worked in both color and black and white. For more detailed views, I used medium format film in cameras that made square images. With a panorama camera, I made wide views to record the sweep of the space. The form of the original design was respected, but renovation dictated modernization. This occurred in many forms, most of which are invisible in the finished theater. Modern systems were integrated throughout. To that end, the theater was opened up like a patient on the operating table. For a time, one could stand on the dirt floor and see blue sky above. The progression of disassembly and then reassembly was recorded in the panoramic views from several vantage points.

During the years over which this project unfolded the digital revolution swept through the field of photography. The new technology made fieldwork easier and also allowed for much improved interpretations of existing film negatives.

In all views I worked with the available light. It would have been impractical to light such a vast and changing scene. I prefer available light photography because the light is part of the subject. It was especially interesting to work in a space that when functioning properly is defined and controlled by light. Initially, the audience chamber was lit exclusively with incandescent light. Images from this time are bathed in yellow. With the opening of doors and windows, daylight much brighter than the inside light blasted through these orifices. Construction crews hung sodium vapor lights, (similar to streetlights,) which proved challenging to work around. No matter what combination of lighting was in play the levels were low. This necessitated exposure times so protracted that moving people became blurs. In effect, this method recorded activity over a period of time. With the conclusion of the restoration, the house lights could be adjusted to perfection and the theater look as it was intended in photographs.

Over a period of years I spent many hours in the space. A few observations should be noted. I recorded graffiti in restrooms, backstage and in the hinterlands of the catwalks. There was no profanity or meanness. Sometimes performers signed their names. The set painters in the catwalks, equipped with paint, brushes and skill, signed their names with flair. Small details can speak volumes. Names carved into the wooden bench backs of the second balcony were carefully retained in the restoration, thus acknowledging the personal, individual histories of the patrons from a half-century or more in the past.

When the major structural renewal was finished, the fussy work of restoring the ornate plaster, and painted walls and ceilings commenced. When this work concluded new seats were installed and the building was almost ready to begin a new chapter. The doors opened on schedule on August 29, 2006. The final views in this series show the opening-night audience from the stage just before the curtain went up for the first time in over 50 years. 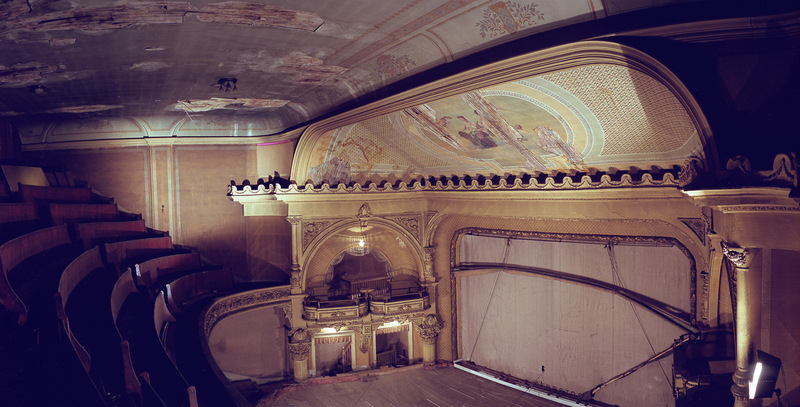