This is my nicely illustrated book of these remarkable artifacts.  Circus Posters: Historic Posters Come to Light

In June of 1972 when I was just out of high school I was intrigued by a couple of buildings near the intersection of Routes 346 and 20 in Hoosac, NY. I came to calling this area the land that time forgot.

There was a closed general store richly adorned with vintage advertising. That was good, but it got better. Next to the store was a barn with a shallow open bay that fronted the road. As one slowed to stop at the intersection you could glimpse some captivating graphics. Investigation revealed a floor to ceiling wall of 3” flat boards that had served as the base for vintage circus posters. Most dramatic was the crumbling remains of The Lion Poster.

In some spots the posters were glued one atop the other. The posters were many layers deep. I photographed this in black and white and from time to time made an occasional print. And I wondered just what had gone on here and how much had I missed?

Time passed. One day the building was stripped of its advertising art and made new with a fresh coat of paint. Around 2000 the open bay of the barn was enclosed and made into an antique shop. I stopped in and saw a few scraps of the old posters still clinging to the wall, but all seemed lost.

Speaking to the store’s proprietor I was told that yes, posters had been on that wall. Circus posters advertising shows in Bennington, VT and North Adams, MA had been glued one atop the other in this protected spot for years. A couple of pieces had been pulled off and were up in the loft.

I wondered if I might have a look so up the stairs to the former hayloft we went. The light was low, just a small window at each end. The floor was completely covered in bat shit which crunched underfoot. On a sidewall were colorless lumps of posters nailed to the wall. They were an armful measuring 3’x5’. A deal was struck and I flopped them into the back of my Volvo wagon. I was overcome with euphoria. An inquiry over some obscure history had revealed a treasure.

Once home, as I examined the find my euphoria was tempered with the reality that I taken ownership of a conservation nightmare. These were large pieces cut from still larger posters. Each group was about 20 layers thick in spots. Experiments showed the glue, likely wheat paste, was soluble in water. At room temperature it took days to soften but by that time the paper was too weak to be worked on. Conservation is possible, but will be a formidable challenge.

The coming of the circus was announced by posters, hung by an advance team a week or two before the arrival of the circus. These could be displayed on any good-sized surface with public exposure. Barn and shed walls were typically pressed into service. But these walls were not smooth and were exposed to the elements. The lithographed paper posters deteriorated quickly. Once glued to an irregular clapboard wall, there was no salvation.

Circus posters were plentiful but ephemeral. Which is why these examples were special. These posters were hung in a mostly protected space. Then, fortuitously, even if roughly removed, they were put aside.

There are two multi-layered fragments of circus posters dating to the first quarter of the 20th century. They are sections cut from a billboard-sized wall onto which they were pasted, one atop the other. The number of layers varies from 12-20. The top dozen or so layers are complete. That is, a fragment torn and or cut from a complete larger whole. The size of the overall original from which sections were removed is unknown.

Posters were delivered in sections and hung like wallpaper in vertical strips. There is overlap where the strips intersect. In some instances the registration is off, illustrating the slap dash attitude of the paperhangers. Paste was brushed on liberally and unevenly. As the layers accumulated wrinkles were papered over and became amplified, thus adding topography to what was intended to be a flat surface. As more and more posters were added to the wall the layers became unstable. Tacks and nails were driven through the pile to hold them to the wall. It appears that unstable sections were torn off and discarded to stabilize the base for the next layer. This could explain the variability in the number of layers at any point in each fragment.

In addition to the multitude of paper layers there are also at least two layers of linen fabric, one of which is painted white with navy blue lettering. Sprinkled throughout the layers, glued to a current poster front were eleven-inch square advertising panels for chewing tobacco. Small showbills heralding the date, time and location of an upcoming circus was pasted atop the illustrated poster.

These two poster fragments henceforth referred to as “Parade Poster” and “Acrobat Poster” appear to have been adjacent and not one atop the other. Their experience was similar but not identical.

The Acrobat poster showbill pasted atop it announces: “Sig Sautelle will exhibit at Ben’gton Thursday, Two Performances Daily, Afternoon a …, Rain or …”

Sig Sautelle (1848-1928) was a master showman whose life story is simply larger than life. If you’d like a glorious diversion, check out some of these links. Circuses under his imprint date from 1882 to his death date. However by 1919 he had combined his circus with Demarest Bros. Wild West. We can assign a date range of 1900-1920 for the acrobat poster.

The Parade poster has no identifying showbill so we can only speculate as to weather or not it too was a Sautelle poster. There are some tantalizing clues. Elephants, camels, horses, tents and the bandwagon depicted on the poster all appear in this Sautelle manifest (scroll down to 1904, try not to get distracted).

Sautelle’s bandwagon survives at the Circus Hall of Fame.  This from the Sarasota Herald-Tribune-April1, 1960 ” The recently acquired pony bandwagon was presented to the circus Hall of Fame by W. Harold Curtis of Pataskala, Ohio. The bandwagon had been kept in his barn since1914 when the Sig Sautelle Circus went off the road. It was built by Sullivan and Eagle in Peru, Indiana about 1900.”

This is very similar to the one depicted on the poster.

The Parade Poster’s top layer is filthy. In addition to the exposure it endured when hung it was laid flat in storage after removal from the wall. Fine dirt has accumulated to the point of obscuring most color and much detail. Exacerbating this, water dripped on the poster as it sat face up in the attic. Water added it’s own marks and helped drive the soil into the paper. This dirt does not respond to dry cleaning with eraser, brush or vacuum. The soil will need to be flushed out the paper by full immersion in warm water.

The Acrobat Poster is brighter and less soiled. It does have mold and mildew working it’s way up from the bottom. More dramatic still, while both posters shed dirt and soil this one was riddled with shotgun pellets. Someone took potshots at the high-wire act!

These are just the top two posters of dozens in the bundles. Showbill fragments are visible in lower layers from the edge but at present are tantalizingly out of reach and illegible.

If conservation and disassembly is accomplished we will learn much more.

The Shelburne Museum has acknowledged these unusual objects. The Sautelle Acrobat Poster and some of these photographs were exhibited in Papering the Town: Circus Posters in America  . 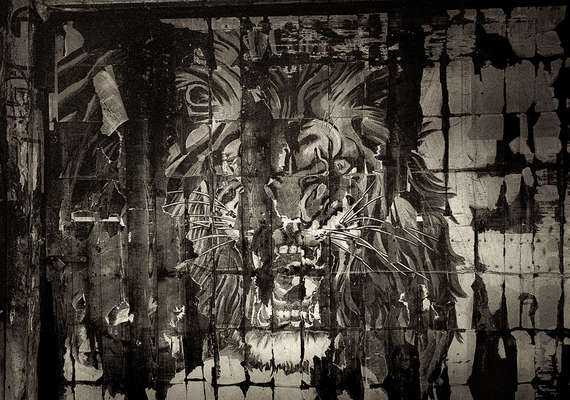 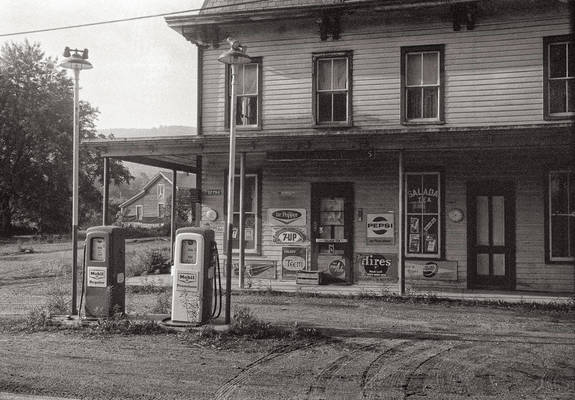 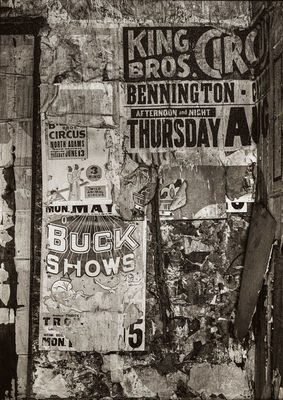 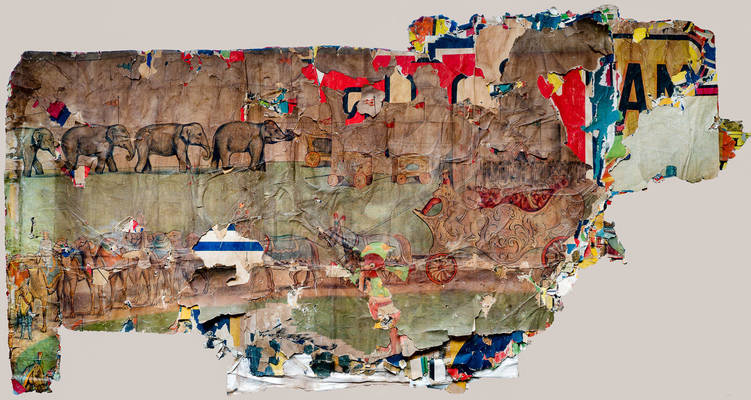 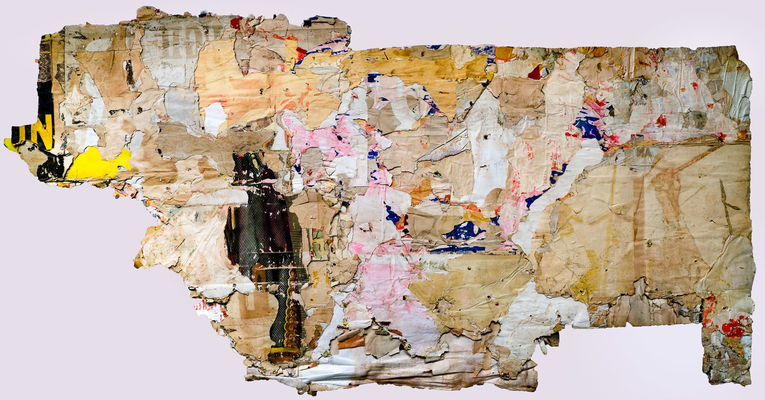 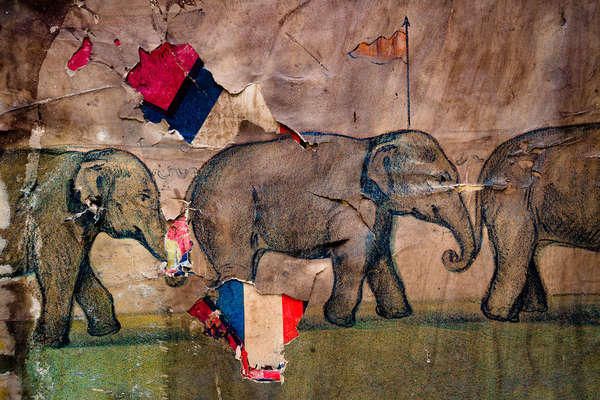 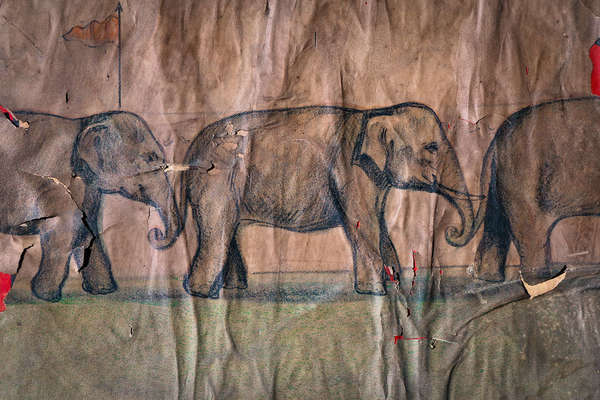 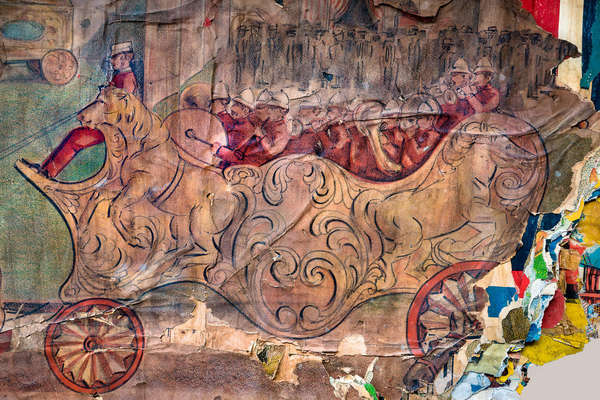 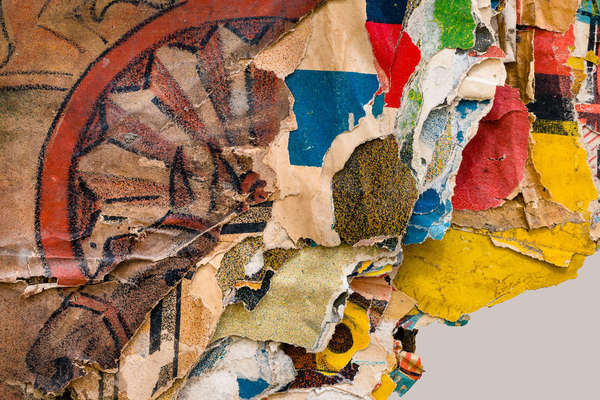 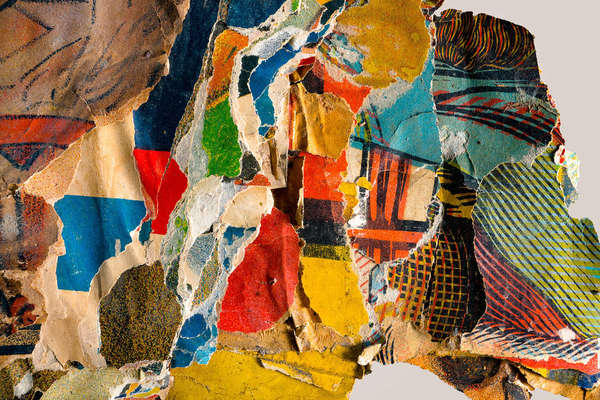 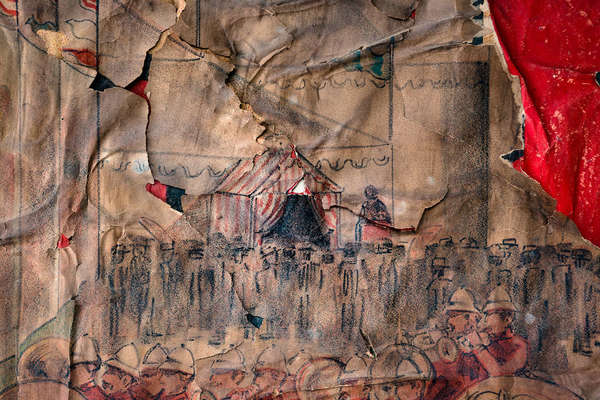 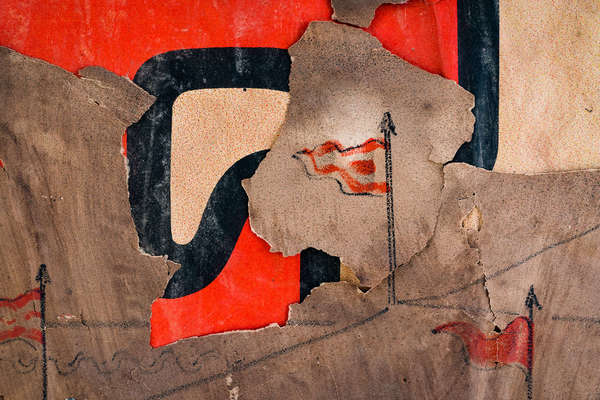 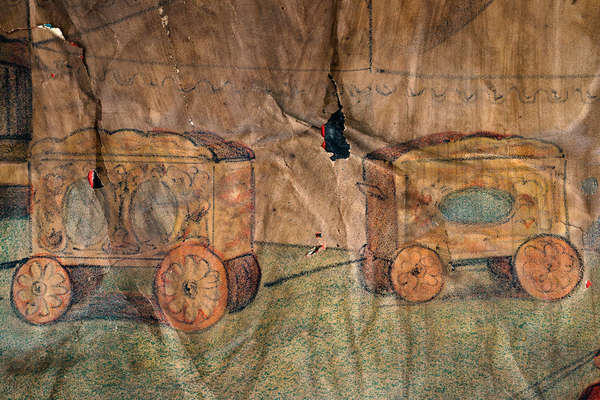 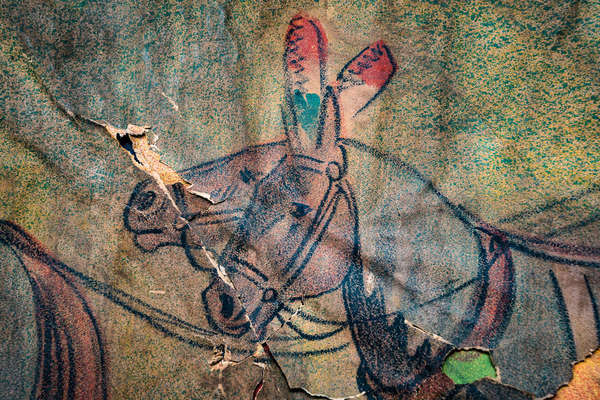 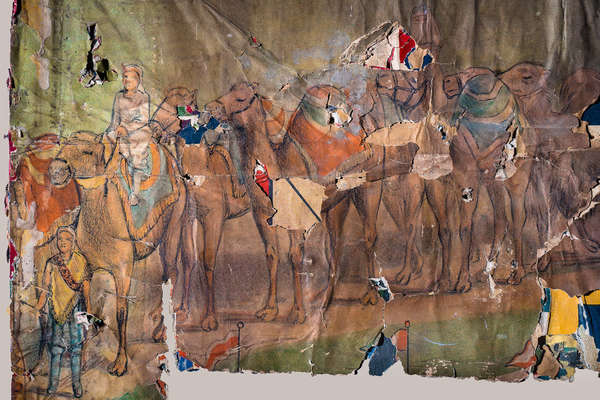 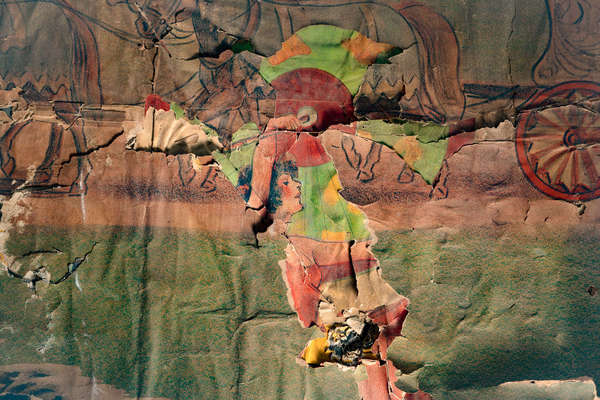 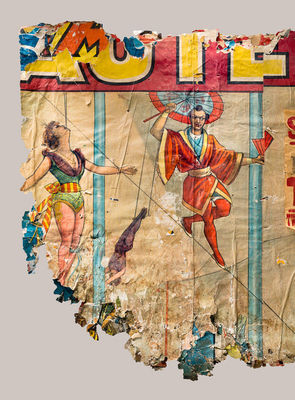 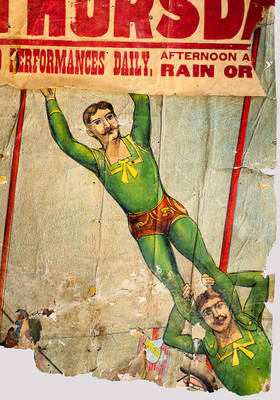 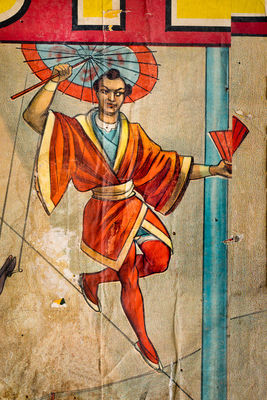 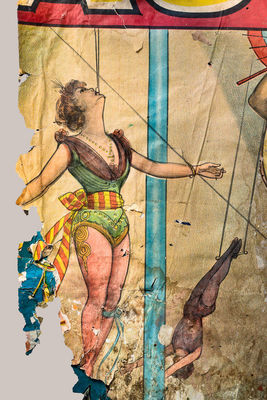 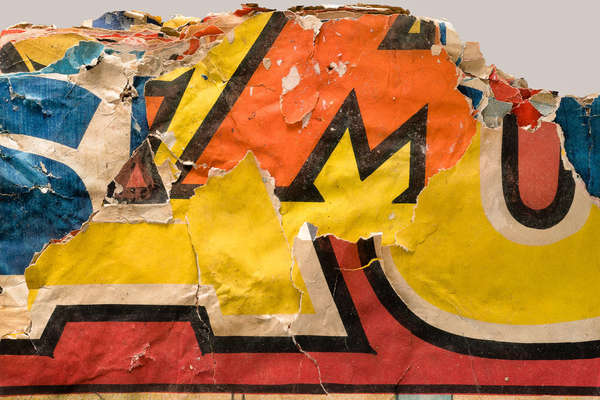 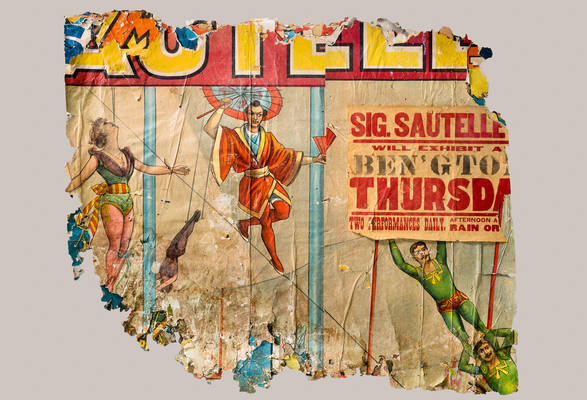 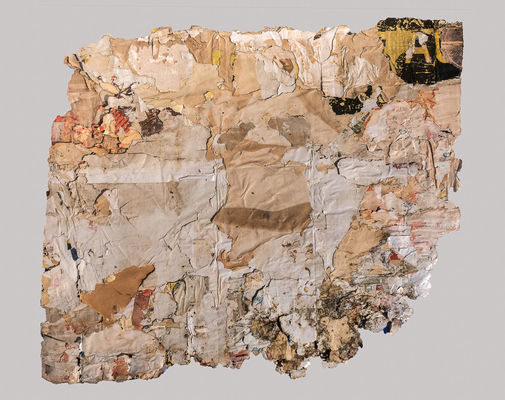 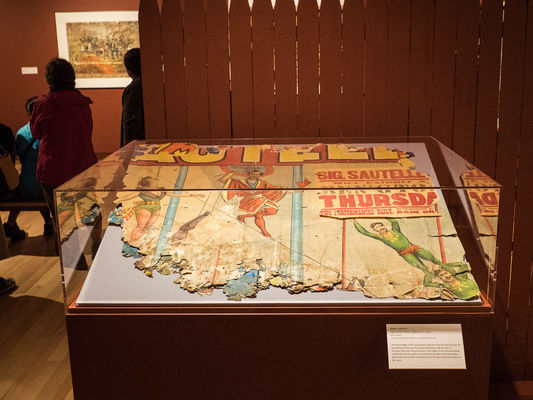